If Spurs succeed to make the 5/5 in the finals to win the title, then they will achieve something that has never  happened before in the NBA. Will become the first team to win (at least two) titles in 11 years, while maintaining at least the same three players to its roster!  Duncan, Parker, Ginobili was present in the title of 2003 and they are all still here, 11 years later. No group has done that before, as that will attempt to achieve the Spurs in this year's finals, which will begin on June 6.

Neither the Lakers last 15 years (they had only Kobe Bryant, Derek Fisher in championships won from 2000 to 2010), not even the empire of the Celtics in the 60s, since Bill Russell, Sam Jones, Tom Heinsohn, Bill Sharman and John Havlicek (they won most titles) played several years together, but never three of them did not play simultaneously in a champion team of "Celtic" in over 11 years. 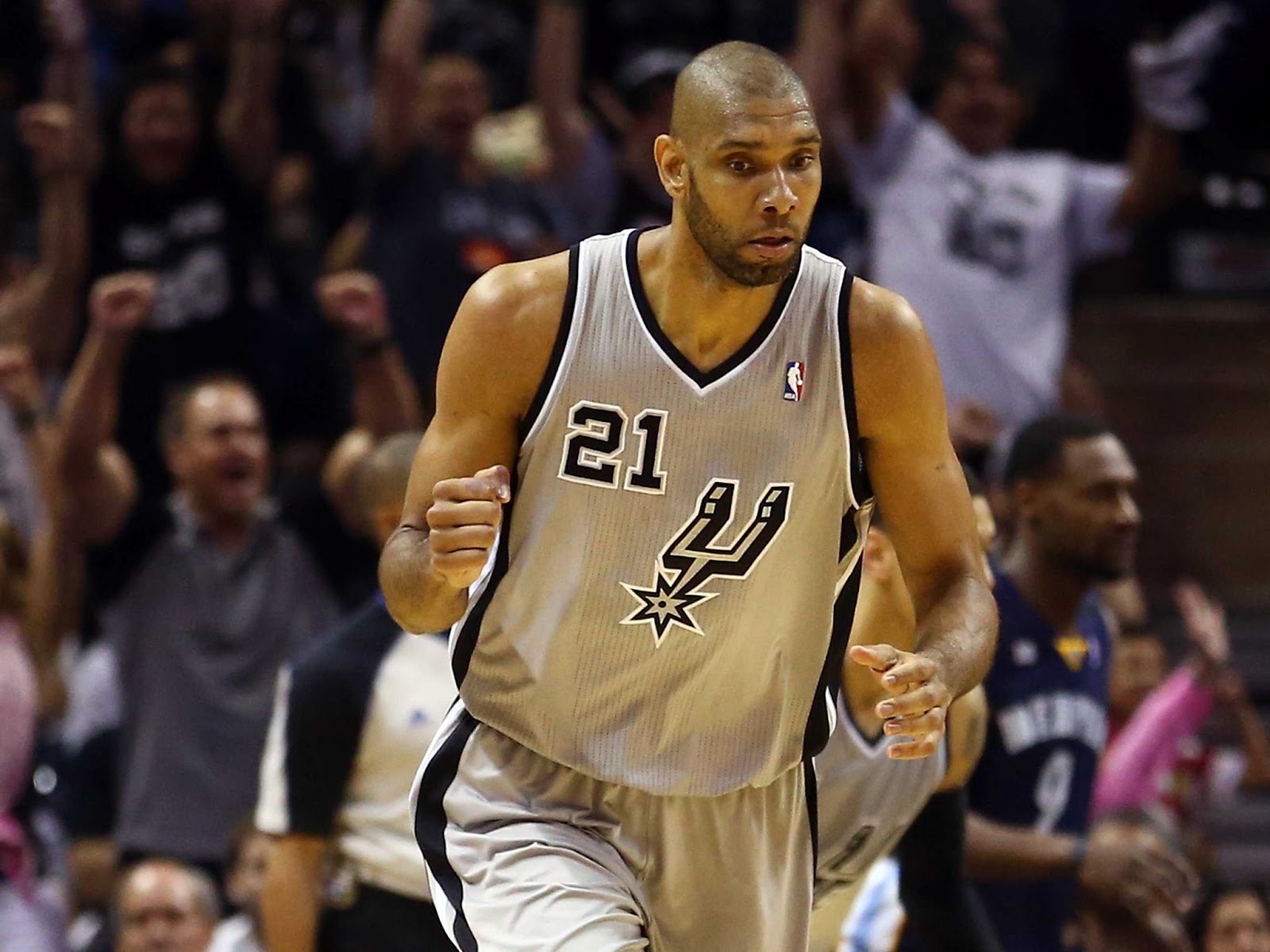 At the individual level, not  Tim Duncan is another four victories from doing something (also) unique. If the Spurs get the championship, then Tim Duncan will become the first player to win with the same team two titles at 15 years old!  Kareem Abdul-Jabbar took his first title in 1971 and his last in 1988 (at 18 years), but in 1971 he played the Bucks in 1988 and the Lakers.
Robert Parish, no, he won two titles within 17 years, but in 1981 he was player of the 1997 Celtics and the Bulls.

At present, the relevant record shared by John Havlicek and AC Green, who won just 14 years old the first and last title, playing on the same team. With the difference that the former won his first title with the Celtics in 1963 and stayed in Boston until they get to the last, in 1976, while Green went from Phoenix and Dallas until you come to LA in 2000 and be crowned champion, something that had happened in 1987 with the Lakers. 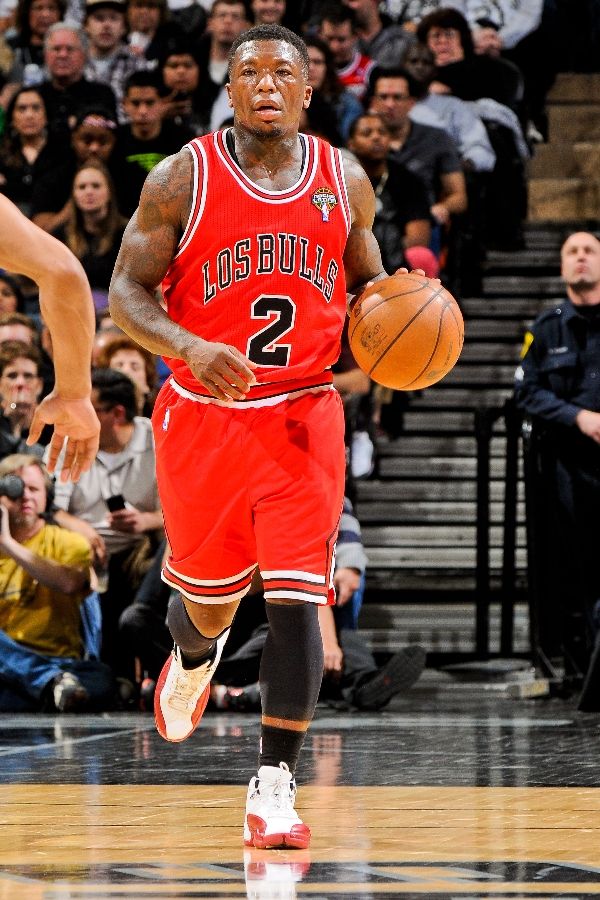 At the last game , like all show-game Chicago, the Nate Robinson made the worst year appearance of but spared the worst performance in the history of NBA.

Preparing to celebrate his 29th birthday, he is eight years in the league, but performances such as that made in the fourth match of the series with the Heat, has not done much during his professional career.  Nate Robinson has pulled this year more paddle than you would expect even he tries to cover the absence of Derrick Rose and his injuries Kirk Hinrich, but man. And so at some point you lived by forces. The truth is that it bore too much ...

Heat wanted to push the vrachysomo guard to short-circuit the "bull" and disappeared literally! The Robinson played 32 minutes, scored 0/7 twos, 0/5 three pointers, 3 rebounds, 4 assists, 2 steals, 1 block and 4 errors. Stayed at absolute zero in scoring, but the fact that Tom Thibodeau left him more time on the court helped him escape from a negative record. What's this? On worst individual performance in the history of the play off, "medal" that holds the Dennis Johnson from seventh final in 1978, when measured 0/14 attempts!

" Nate had a tough night, but we all know it's hard man and I'm sure he will recover" claimed after the match, Tom Thibodeau, who hopes that the player will make the fifth match appearance similar to that had made in the first game of the series. Then the Bulls had won the American Airlines Arena in Miami, just two days after their qualification for the Nets. Since then, of course, count three successive defeats, with the Heat to make whatever they want on the court and are now one step away from qualification to the finals of the East.

For the record, the 65 points the Bulls in yesterday's match is the least that the team has achieved in the history of the play off, while 25.7% in shots on field ugliest percentage at showdown post season. Yes, the "Bulls" ran out of forces, absences Deng - Hinrich combined with that of Derrick Rose and various injury problems of Noah - Gibson did not allow them to pursue something more. Opportunity for recovery exists, the series has not been found, but things are more difficult, and only a miracle team Chicago will turn against the state.

Miami and Chicago revive the 90s with "punches" and knocks down the middle. Or rather the cry that has been linked to professional wrestling: "Let's get ready to rumble"! 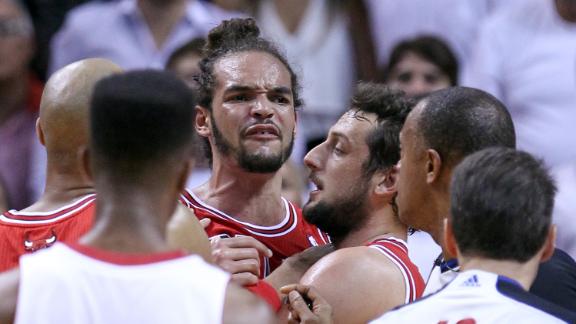 "Let us prepare for a fight," So! In the second game shared 9 Technical fouls and expelled two players. The third match was eliminated ... Only one, but the Bulls and Heat "went" series to another level. The two teams do not really like each other and showed just before the jump ball. Players the Bulls and the Heat did not exchange even a handshake before the start of the race, something that does not happen too often in the NBA. Almost ... never for accuracy. Not for at least one game.

"No we love one another and it shows on the court," said Taj Gibson, one of two players (along with Noah) expelled in the second race. In the third, however, there were several occasions to fight. Pushing the Joakim Noah to Chris Andersen (to help him get up Nate Robinson), the strong shove of Nazr Mohammed who laid his LeBron James on the court, even the incredible move Noah to ... applaud their Chalmers, Bosh while disagreeing strongly (!) were snapshots threw some more fuel to the fire.

The pushing and "flopping"

At the end of the match, however, pushing the Nazr Mohammed in LeBron James was at the center of all ... "A push should not be punished by expulsion, that he threw down was a sneaky hit" professed by Nazr Mohammed to issue phase, while Tom Thibodeau spoke flopping (of LeBron) and Nate Robinson emphasized his words coach saying: "You've seen LeBron in many commercials, is a good actor."

The rift between the two specific groups, of course, did not begin nor yesterday, nor in the second game of the series. It has deeper roots which lead us on March 27, the day ie the Bulls stopped his winning streak in Miami at 27-0, eknefrizontas champions with hard play. The players at the Miami then left the stadium frustrated without shaking hands with the hosts, while foul like ... hugging Kirk Hinrich to LeBron James or another of Taj Gibson in "King", prompted the MVP of the regular season to refer to arbitration after the race.

In essence, witnessing the tougher series of this year's playoffs, not th and the last 20 years. After three games have expelled three players have shared 12 Technical fouls and have been designated a total of 145 fouls (48.3 per game)! To do and the necessary comparisons with what we've seen so far in 55 games conducted until this year, take a look in the table below.

Michael Jordan is in my hometown SPETSES,MYKONOS GREECE 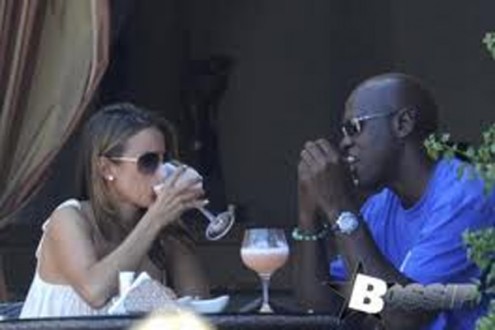 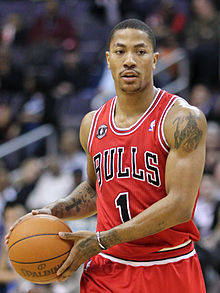 Ready to put uniform and included in the Bulls 12 for the 3rd game against Miami is rumored to be Derrick Rose, who is closer than ever to return.


Seems to have gone an entire ... eternity since the last time that Derrick Rose played basketball. But the potential to see him in the third match of the series with Miami, now seems more likely than ever, as all the information coming from the other side of the Atlantic want Rose to be wearing for the first time his form and be included in the 12  the Bulls in the game Friday.

This does not necessarily mean that he will
play (this is ... theme Thibodeau), but all show that the young superstar the Bulls will probably return this year and not next year. Such reversals, of course, the longer we are used to so long (very long) case of the return of Rose. The conditions, however, are ideal for the comeback, with the Chicago come from the heaviest defeat in the history of the postseason and looks for the "two in two" at the United Center and preceded by 3-1 in the series.

By the second game of the series with the Heat, the views were leaning in that it is preferable not to return this year (or not to "spoil" the rotation, either not to disorient the group) was significantly more. After ... wood but ate in the morning under the second match, the Bulls might have the greater need than ever ...

which team will win the championship write your answer 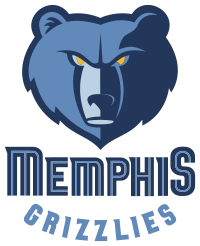 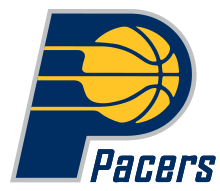 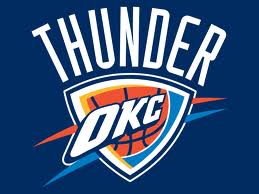 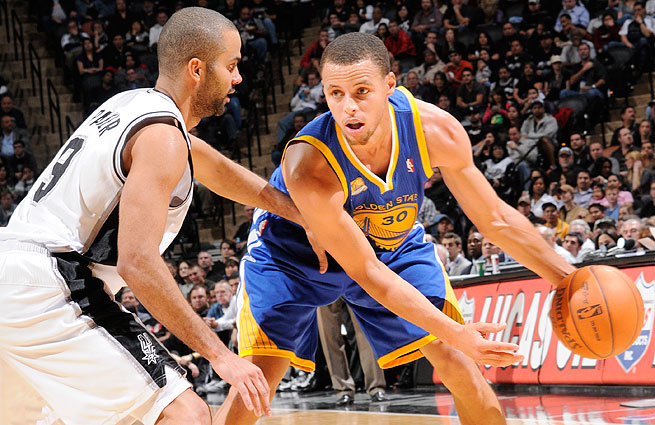